Learn With Us:
The Diary of Perpetua

In a world ruled by men, one young mother had the courage to write her own story.
During a government crackdown on those believed to have angered the gods, Vibia Perpetua is arrested, along with several other new Christians. Sacrificing to the gods will earn her freedom - allowing her to go home, save her family's honor, raise her infant son - but at the cost of abandoning the One who already set her free, giving her an identity beyond "wife of," "daughter of," or "citizen of." In her words, "I cannot be called anything other than what I am: I am a Christian." Thus begins a test of loyalties, with everything she loves - her faith, her familial relationships ... and her son - at stake.
Imprisoned in the North African city of Carthage around 203 CE, Perpetua chronicled her arrest, her trial, her visions from God, and her love for her family.  Her prison diary, passed down by Tertullian, is one of the oldest known female-authored documents and tells a remarkably human story that still resonates today.

Today, over 340 million Christians around the world live out Perpetua's story, suffering discrimination, physical and sexual assault, torture, arrest, and death because of their faith. Still Small partners with The Voice of the Martyrs with this show to raise awareness and funds for our brothers and sisters whose stories sing today.

Exercises for Reflection and Discussion​

​        ​​One of the questions that frequently arises when we hear the stories of martyrs is "could I do that?" We wonder if we'd have it in us to be martyred for Jesus, or if we'd cave under the pressure and the fear. But asking "could I do that" is like asking "have I studied for my exam": it doesn't really help us prepare for the exam, it just gets us more worried about it. The question that will really prepare us is "why is it worth it to give my life for Jesus?" After all, every Christian is called to give up his or her life, whether by dying for Jesus or by living for Jesus.
This is an exercise that every actor in this show goes through - thinking through, journaling on, and later discussing not just why Jesus is worth it in general, but "why is Jesus worth it to me?"

In the play, Perpetua's father (sometimes played as Perpetua's mother) asks her in frustration, "Why does it matter so much?!" The question is an important one to think through. Why does it matter? What is so special about Christianity that it's worth holding on to? And why not simply lie about your beliefs, while still believing privately?

​This is one of the identifying marks of a Christian, according to Jesus - and one of the most challenging! How do we obey the command to love our enemies? In a culture in which "love" is often interpreted as agreeing with people, how do we hold on to the unique truth of the Gospel that taught us to love them in the first place?
​       Bonus food for thought: "Stephen: A Love Story"

One of the exercises we've used in rehearsal is that of "praying in character." Although it's partly an actor exercise to help us connect with our characters, it ends up being so much more than that. Not only does it become a powerful way to obey the command to "remember those in chains as if you were their fellow prisoners" (Heb. 13:3), but also the prayer is real: we do the exercise in faith that although we may not know the names of the people we're praying for, God can take our prayers, expressed with the names of the historical persons we portray, and apply them to those who need them today.
If you'd like to give it a try, choose a person (you can find some current prayer requests here or take a fun little quiz to get to know a Diary of Perpetua character here), and pray in first-person, as if you were in their shoes. Who is on their mind? What pressures or challenges do they need God's help with? What are they unexpectedly thankful for?
​

Some Great Websites to Check Out 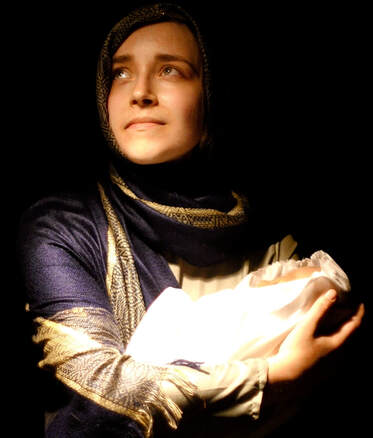 "I can't say my life turned out how I expected
but I can't say I have got any regrets..."
- Perpetua, The Diary of Perpetua