Learn With Us:
The Prophet Project

The Bible is a dramatic love story, starting with a relationship tragically broken in Eden, followed by years of God's relentless pursuit of people -- and their relentless pursuit of their own way -- and coming to a climax with the restoration of relationship on the Cross.
The prophetic books of the Bible give unique expression to that story, bursting with raw emotion, metaphor, and breathtaking poetry. The Prophet Project tells this epic tale exclusively through the words of the Biblical prophets, drawing together their words with dance, physical theatre, and music for a unique and unforgettable version of the greatest love story ever told.

The play -- like many of the words of the prophets -- exists in multiple layers of meaning. It follows the story of love, betrayal, and redemption, lived out by the prophet Hosea and his unfaithful wife Gomer, but like their story, points to something so much bigger: God's relationship with people. It follows Israel's history, and yet points to something still broader: God's love for and pursuit of the entire world. And while it is a love story that encompasses all of history and all of humanity, it points to something still more personal: God's passion for you, as you are, no matter what you have done or what has been done to you.
​

The defining event of the Israelite identity was the Exodus, in which God freed them from slavery in Egypt, brought them through the desert, established a covenant with them which set them apart as His people dedicated to justice and mercy, and brought them into a new land. Upon their arrival in Canaan, however, they began to adopt the religious practices of the previous inhabitants of the land, including cult prostitution and child sacrifice. A cycle began of adopting other nations' gods, being oppressed by those nations, and then turning back to God – at least nominally.
Under the tyrrany of Israel's fourth king, Rehoboam son of Solomon, the majority of the tribes split off, forming the kingdom of Israel in the north (often poetically called Ephraim by the prophets, since Ephraim was the largest of the rebelling tribes), while King David's line remained in power in the southern kingdom of Judah. Eventually, as the cycle of idolatry continued, both kingdoms were sent into exile – Israel first into Assyria, and Judah about 130 years later into Babylon.
​       God spoke through His prophets all during this period, including during the exile, reminding the people that they were in a covenant with Him and that He, for one, would be faithful. After 70 years in exile in Babylon, the people of Judah were allowed to return and rebuild.

Relationship: The Key to the Prophets

The prophetic books in the Bible intimidate many of us. They're so long, and they're so ... upset. And if we're honest, there are other parts of the Bible that make us similarly uncomfortable. But if we remember that the context is relationship, we realize that songs of heartbreak, betrayal, and impassioned love are nothing new to us.
Relationship is the lens through which we need to look at the prophets, their message, and indeed the entire Bible. This sermon, from a series entitled "The Gospel According to Amos," explores how relationship is the context of the prophets and makes their message not only understandable, but deeply compelling.

Questions for Reflection or Discussion:

Justice, Wrath, and Other Fun Stuff

Let's face it: wrath and judgment are uncomfortable subjects. Or are they? If we're honest, we may find that although we often call God's wrath unfair, we're actually rather protective of our own right to wrath. And with reason: anger is a God-given alarm system for when a boundary has been crossed, a fire lit under love when something it values is threatened. As scary as it is, God's wrath is actually a function of God's love. And this is why the Cross is absolutely indispensable in our beliefs and in our lives.

Questions for Reflection or Discussion:
A Few Awesome Resources:

At the very beginning of humanity's story, we had a choice to trust a loving God, or try to be God. We chose the latter. Ever since, we've been plagued by the curse we chose: the human desire for control, and our subsequent tendency to abuse any measure of power we hold over others.
The curse plays out in a million ways: racial injustice, male domination, child abuse, elder abuse -- and the high rate at which those who have suffered under others' abuse and injustice, (who we might expect to protect the vulnerable), turn around and abuse others once they are in a position to do so. Because of what we are like, any god we create necessarily becomes an oppressive god.
This is why idolatry is such a big deal in the Bible. Idol-worship wasn't just a matter of making artistic statues or "calling God by another name," it was tragically substituting the identity and character of God for one made in our own image. In those days, idol-worship often included cult prostitution and child sacrifice. Today, our self-worship -- our conviction that "I am my own ultimate authority" -- puts even the most well-meaning of us in a prime position to be oppressive. (Check out this insightful article by Abdu Murray on our newfound culture of shaming.)
The original curse is not the only one we have chosen. Frequently, we find that God gives us our own way - from Pharaoh's deliberate, and eventually irrevocable, hardening of his heart in the book of Exodus, to the unholy alliances and idols God's people repeatedly chose, which ultimately ended up enslaving and killing them. Many theologians have pointed out that the final judgment spoken of in the Bible isn't so much a matter of God "sending people" to Heaven or Hell, but respecting the choices we make about whether or not we want to be with Him.

Questions for Reflection or Discussion:

A Few Ways to "Do Justly" 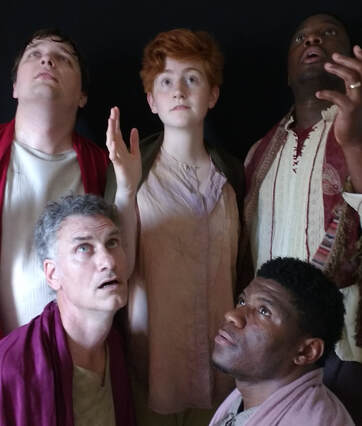 "The Spirit of the Lord God is upon me,
because the Lord has anointed me  to bring good news to the afflicted;
He has sent me to bind up the brokenhearted,
to proclaim liberty to captives  and freedom to prisoners;
to proclaim the favorable year of the Lord
and the day of vengeance of our God;
to comfort all who mourn, to grant those who mourn in Zion,
giving them a garland instead of ashes, the oil of gladness instead of mourning,  the mantle of praise instead of a spirit of fainting.
So they will be called oaks of righteousness,  the planting of the Lord, that He may be glorified."
- Isaiah 61:1-3